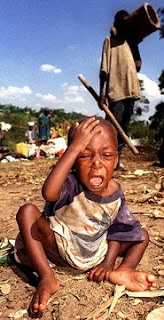 What these children have in common?
The Killer of their relatives, dads and mums still stay at large and enjoy impunity.

The Rwandan genocide and 5,000,000 Congolese and Hutu refugees killed are the culminating point of a long British battle to expand their influence to the African francophone Great Lakes Region. The UK supported Kagame’s guerrilla war by providing military intelligence, advice and equipment. The UK refused to intervene to stop the genocide because they were confident that Kagame will win the war at any cost. All Kagame’s 20,000 fighters were on the Ugandan payroll paid by UK budget support. 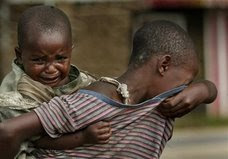 
Everything was destroyed by war. Everything. Families gave daughters to the military in return for their lives. Soldiers came and went, leaving girls as young as twelve alone with children of rape that are now starving, the husbands and fathers lost as adult males were conscripted or slaughtered. Teacher’s salaries are 1,000 francs a month, less than three US dollars, and teachers weakened by hunger cannot last to noon. Parents in small villages cannot pay school fees of about one US dollar a month per child. 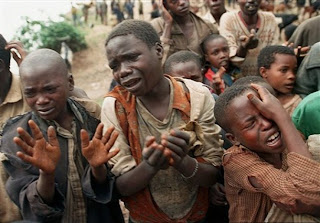 The FDLR and local Congolese journalists claim that the Rwandan military and their criminal networks and militias continue to plunder raw materials from the DRC and ship them out through Rwanda. In turn, the Kagame government claims the FDLR seeks to destabilize Rwanda and finish what the 1994 genocide started. As violence escalated this spring, officials in Rwanda claimed "genocide against the Banyamulenge" was underway in eastern Congo.

"We would certainly not use the term genocide," said Andrew Philip, spokesman for Amnesty International's Central Africa Team, in a June 15 communication with this reporter. He dismissed claims by RCD commanders and Rwandan officials, noting that all combatants looted, raped and killed civilians of all communities.

Heritage Oil & Gas was founded by Tony Buckingham, an executive linked to a confusing network of front companies and offshore island holdings. De Standard reported June 19, 2003, on Heritage Oil's maneuvers in DRC and Uganda, and its links to companies like Branch Energy and Diamond Works, both exposed for operations in war-torn Angola and Sierra Leone.

Buckingham is a veteran of the UK's elite SAS military corps, and played a founding role in the private military companies Executive Outcomes of South Africa and Sandline International. De Standard suggested that Buckingham seeks the pacification of Ituri to exploit minerals in the region.

Buckingham's ties to US government officials are detailed in Wayne Madsen's book Genocide And Covert Operations in Africa, 1993-1999 (Edwin Mellen Press, 1999). The SAS mercenary soldier Simon Mann arrested this March with a posse of followers in Zimbabwe (allegedly en route to institute a coup in Equatorial Guinea) is a co-founder with Buckingham of Executive Outcomes.

The Truth can be buried and stomped into the ground where none can see, yet eventually it will, like a seed, break through the surface once again far more potent than ever, and Nothing can stop it. Truth can be suppressed for a "time", yet It cannot be destroyed. ==> Wolverine
Posted by Jean-Christophe Nizeyimana at Sunday, July 05, 2009 0 comments